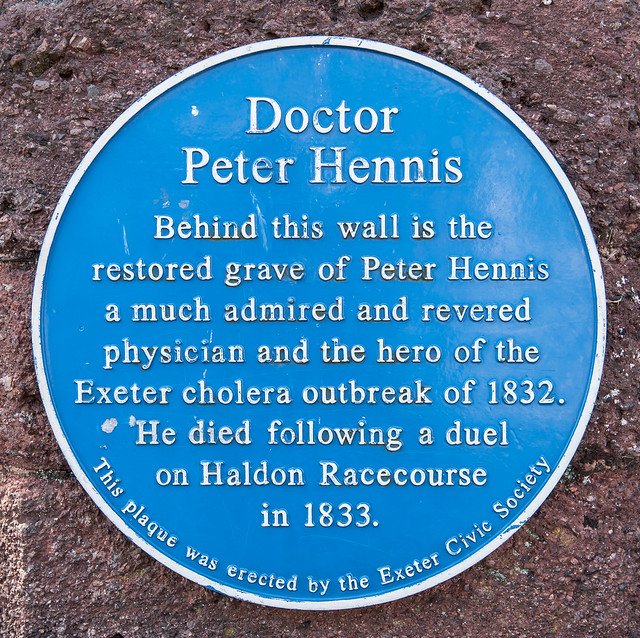 When the Judge shot the Doctor: Devon’s Last Duel.
An illustrated talk by Prof. David Pugsley on Thursday, 1st June, 2023 at 7pm in The Devon Rural Archive.

Sir John Jeffcott, Chief Justice and Judge of the Vice Admiralty Court of Sierra Leone, fatally shot the Exeter physician Dr Peter Hennis at Haldon racecourse in May 1833 in the last known duel of honour in Devon. Hennis had worked at the Exeter Dispensary situated in Friernhay Street which provided care for the poor and children considered unfit to be admitted to The Devon and Exeter Hospital. He devoted a great deal of time to their care and was considered to a be a local hero for his work during the cholera outbreak in 1832. The city was outraged by his death and 20 000 citizens are said to have lined the route of his cortege as it moved from his funeral service at the Cathedral to the interment at St Sidwell’s Church.  In this talk Professor Pugsley will reveal the events that led to the duel, discuss its aftermath and question the evidence of Devon’s last duel.

David Pugsley is a renowned Law Professor and popular raconteur specialising in 19th century court cases. He was a European civil servant in Strasbourg for three years and taught law for 40 years in the universities of Southampton, Johannesburg, Bari and Exeter. David has a special interest in causes célèbres in the West Country in the 19th century.

Image: The Blue Plaque commemorating Dr Hennis on the wall at St Sidwell’s in Exeter.