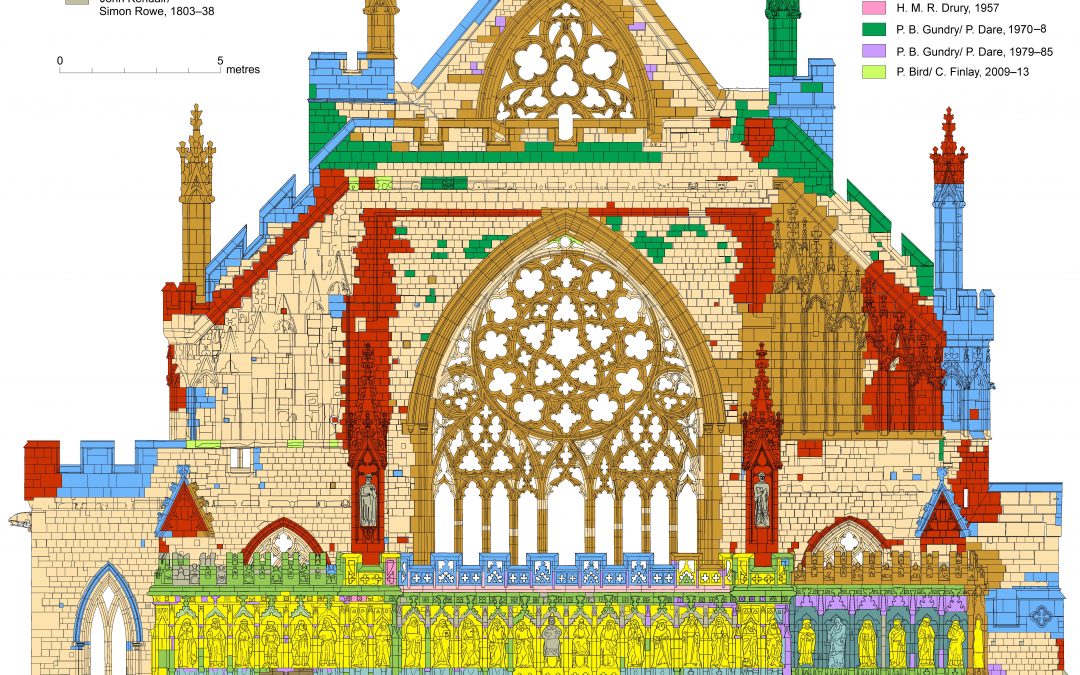 Part III: the late Gothic church and beyond.
An illustrated talk by John Allan on Thursday 4th November 2021 at 7pm in The Devon Rural Archive.

Exeter Cathedral was founded in AD 1050 and is commonly regarded as Devon’s greatest building. The Cathedral Church of St Peter, with its imposing Norman towers, owes its Gothic style to Bishop Bronescombe, who started rebuilding in the late 13th century. The present building was not completed until the mid 14th century under Bishop Grandisson, and has been at the heart of the city ever since. This talk, by the Exeter Cathedral Archaeologist, will describe the structural history of the cathedral, will place it in the story of medieval architecture in England in the Middle Ages, and will describe new insights in understanding this much-researched church.

John Allan, BA, MPhil, is a Fellow of the Society of Antiquaries of London, Consultant Archaeologist to the Dean and Chapter of Exeter Cathedral, and Archaeological Consultant to Glastonbury Abbey. For twenty years (1984-2004) he was Curator of Antiquities at Exeter Museum. He has published one book in 1984 and roughly 50 papers on different aspects of the medieval and later archaeology of South-West England, including medieval and later ceramics, church architecture, monastic sites, Anglo-Saxon coins, castle architecture, Anglo-Saxon town growth and defences, medieval alabasters, and farm buildings. His papers have appeared in national and foreign journals including the Journal of the British Archaeological Association, the Archaeological Journal, and Post-Medieval Archaeology; in the county journals of Devon, Cornwall, Somerset and Dorset, and in conference proceedings.

Tickets are £5 each, and they must be purchased in advance as numbers are limited.

To purchase a ticket please use the button below. Alternatively you can call us on 01548 830832 or email office@dra.uk.net; you will need to supply a valid phone number and email address for our records. By purchasing a ticket you will be automatically subscribed to the DRA Friends mailing list and will receive regular updates about our work and events, but you can unsubscribe at any time. Booking will close at 12 noon on Tuesday 2nd November.

Doors open at 6:30pm for complimentary refreshments and a chance to explore the Archive.